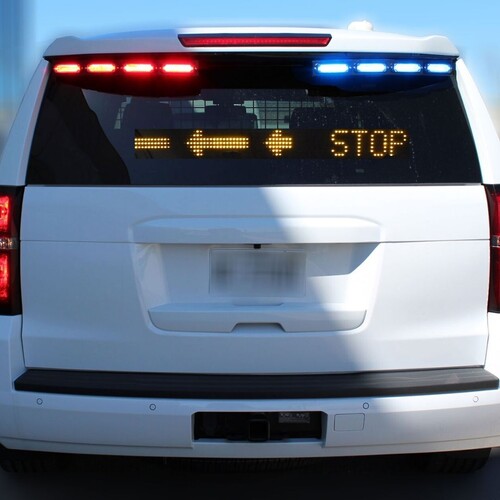 Ever since law enforcement became a serious institution, efforts have been made to distinguish police officers from civilians, be it through attire or their mode of transport. While police cars have significantly improved in speed, strength and efficiency, Emergency Lights/police lights have had a parallel evolution of their own. This discussion reflects on the evolution of the emergency lighting systems for the First Response Vehicle/Fleets, like Police, Fire, Ambulance and also Public Utility Vehicles.

From incandescent gumballs to LED bars, a brief history of Emergency Lights/Police Lights.

Beacons (An intentionally conspicuous light source to draw attention to itself)

Before the signature beacon lights became the police car standard in the 1940s, many police cars were actually convertibles so that civilians could see the officer’s uniform and realize it's an emergency vehicle. Single beacon lights revolutionized emergency lighting for the better, using a bright red, rotating light beam coming out of an encased housing on top of the vehicle's roof did exactly what the beacon needed to do. The light source was usually an incandescent bulb or a halogen lamp, the beacon assembly consisted of the light source a bulb that was stationary, and a curved mirror was spun around the stationary bulb reflecting the light from the bulb, creating a rotating beam of light in all directions. Due to the then beacon's resemblance to the contour of the top of a gumball machine, it was colloquially also known as gumball lights. Intriguingly enough, single beacon lights were permanent fixtures on police cars when they were first introduced, but were soon modified to have a magnetic base, so they could be attached and removed as per the officer’s convenience.

These beacon lights, however, had their own set of advantages and disadvantages.

The next step in lighting evolution came in the form of strobe lights, which emit brief flashes of light at regular intervals. Operating on xenon flash lamp technology, the lights produce a very bright flash for a short period of time as current passes through the gas inside and ionizes it in the process. This technology was and still remains quite popular, with many precincts still using light bars. Strobe lights also came with certain pros and cons.

Strobe lights produce a very powerful flash of light that can be seen from a long distance. This makes them extremely useful for emergency lighting in police cars so other pedestrians and motorists on the road can be alerted of their presence.

The very reason strobe lights are useful is also its biggest drawback. While the light emitted is extremely bright, the flashes in the initial models caused visibility issues for those who viewed them for a long time. To mitigate that, a new kind of light bar was introduced where the xenon bulb would briefly flash multiple times in a row before switching to the adjacent bulb, which would also mimic this behaviour. Thus, the human eye and subsequently the brain got more time to process and properly focus on the flashing lights.

LED bars and beacons are the next step in the evolution of police lights. Lighter, durable, and more efficient than xenon flash lamps, LED lights are encased in a clear dome or housing. These lights have several benefits. Since LEDs are intrinsically small, the light bars can also be reduced in size, resulting in improved wind resistance. They are also highly durable and have a much longer lifespan than traditional bulbs.

Here are a few more pros and cons of this lighting system.

As LED lights are so energy efficient, they generate very little heat. While this is a good thing in terms of energy consumption, it poses a unique challenge in colder months. During extremely cold weather, LED lights fail to sufficiently melt snow or ice buildup, leading to dimmer light production and causing potentially dangerous situations on the road. However, the simple act of regular inspections can avoid such hazards.

In the end, much like other aspects of vehicular technology, lighting in police cars too is a work in progress. With the ever-evolving nature of technology, this may certainly not be the last iteration of police lights.

With over 4 decades of experience, D&R Electronics proudly offers reliable electronics manufacturing and up-fitting for police fleets. Having worked with various precincts and first responders, we offer quality, innovation and practicality in our products and services. Contact us today to learn more.